Growing up I always played team sports from the time I was 4. Baseball, basketball, soccer, football, track and field, even hockey for a couple of years. In baseball I was starting pitcher, basketball starting shooting forward, in football I was always starting defensive back and wide receiver. I'm high school I started to lose interest but fell in love with combat sports. Combat sports you still need a team but ultimately the responsibility was solely on me to perform in competition. Once it is time to fight the buck stops with me. Yes you need good coaches and teams to build yourself as a competitor but the competition performance is on my shoulders. The challenges, mental endurance and emotional control has shown me how to be a leader. To provide my students not only with physical instruction but also the mental approach to competition and hopefully how to deal with adversity and challenges in life.

When I was very young I really had no direction, I was going to college part time and working but felt like I was spinning my metaphorical wheels. I had played around with martial arts in high school but never seriously. After graduating and dropping out of college I found a small muay thai academy at 19 yrs old (I'm currently 36 and it is still in operation 😉 which speaks to its value), and it changed me very quickly. I trained diligently for 5 yrs before even considering competition. In 2010 I found Spartan Pit mma and began competing in everything including muay thai, jiujitsu matches, boxing smokers and mma. It was there that coach Rudy Hernandez taught me to be a good coach and be a strong leader. I began teaching in 2012 and eventually took over martial arts direction there and also offered personal training since then.

My passion for coaching is my desire to hopefully give someone something that no one can take from them. Material things, time, and moments will pass but knowledge stays with you. Imparting any small portion of martial arts philosophy or information will ultimately leave a person better than their former selves. Seeing the look on someone's face as they experience improvement and grasp a bigger concept than the physicality of training brings me great joy. 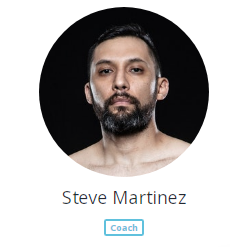